Can Vaping Help You Quit Smoking?

Nicotine replacement therapy, medication, behavioral therapy, cold turkey, and combo treatments: smokers who want to quit have several paths to choose from. The internet is filled with an overwhelming number of studies on the topic of nicotine addiction as well as many tools and tips designed to help people quit smoking. In recent years, vaping has received more attention as a possible smoking cessation strategy.

Many inside the vaping industry — plus a variety of independent researchers — have suggested that vaping is a viable way to quit smoking. Keep reading to find out what evidence supports these claims. 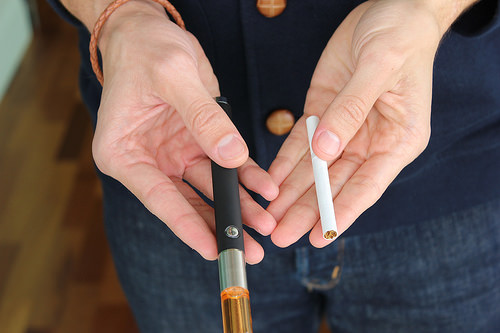 If you are a smoker looking to quit, you probably have one big question about vaping: Will it help me quit smoking? Unfortunately, you won’t find a simple answer. Scientific studies, anecdotal evidence, and expert opinions are split. More research is needed to fully understand all of the potential risks and benefits of vaping.

However, you should be aware of some basic facts about vaping to quit smoking:

Vaping isn’t a silver bullet for smoking addiction — but neither are any of the FDA-approved products designed to help people quit smoking. Instead, any quit-smoking aid is simply that: an aid. From nicotine patches to e-cigarettes, no product has the power to make quitting smoking effortless. Vaping has already helped a lot of people quit smoking, but a positive outcome is not a given. Dual users who smoke and vape will find it even harder to quit. Similarly, you won’t kick a nicotine addiction without intentionally decreasing the nicotine content of your vape juice over time.

Smoking addictions are more than a physical addiction to nicotine. That’s why the most successful quit-smoking programs, such as the American Lung Association’s Freedom From Smoking, also address the behavioral and psychological components of smoking addictions. It also explains how vaping is able to help many people quit smoking, even those who have found traditional methods unhelpful.

In a recent study conducted at the University of East Anglia and funded by Cancer Research UK, researchers interviewed 40 vapers to explore the relationship between vaping and long-term smoking abstinence. Not only did the study suggest that “vaping is a viable long-term substitute for smoking,” it also shed light on why and how. They found that:

Dr. Caitlin Notley, the lead researcher of this study, noted that vaping can be a “substitute [for] many of the physical, psychological, social and cultural elements of cigarette smoking.” Some smokers find nicotine replacement therapy to be ineffective precisely because they enjoy the act of smoking. Nicotine gum or patches can alleviate physical cravings for nicotine, but they do nothing to replace the soothing ritual of smoking. Vaping e-cigarettes, however, allow users to continue their regular routine while working toward a nicotine-free experience.

By switching to e-cigarettes, users can mimic their smoking habits while accomplishing two things:

You may find vaping e-cigarettes particularly appealing if you’ve tried quitting smoking in the past. Most of the people in the study’s sample group reported “long histories of tobacco smoking and multiple previous quit attempts.” In vaping, they found an alternative to smoking that was cheaper, more convenient, and as enjoyable.

Many studies that cast doubt on vaping as a method to quit smoking focus on dual use, and it’s true that many smokers who try vaping end up using both products simultaneously. This is problematic because smoking even a few cigarettes a day comes with serious health risks. However, the fact that some smokers choose to dual use reveals nothing about vaping’s potential as a safe and effective way to quit smoking. It makes sense that, if you vape and smoke, you won’t make much progress toward reducing your nicotine consumption and minimizing the health risks associated with smoking.

Vaping is best used as an alternative to smoking. Rather than adding e-cigarettes to your smoking routine, use them to replace regular cigarettes. For a smoother transition, it’s important to find the right nicotine level for your vape juice. Here are the most common options:

Most smokers start with a vape juice that’s roughly equivalent to the strength of their favorite cigarettes. Even if your goal is to eventually eliminate nicotine, you may find that gradually lowering your nicotine consumption is a more effective approach than quitting cold turkey.

Many smokers do not enjoy vaping simply because they have chosen the wrong nicotine level. If your vape juice contains less nicotine than your favorite cigarettes, you may find yourself vaping more frequently or for longer to make up the difference. The vape juice may also be too weak to satisfy your taste and throat hit preferences. However, vape juices that are too strong for you may leave you feeling ill. Consuming more nicotine than usual can cause you to experience unpleasant symptoms, including nausea, diarrhea, dizziness, and a rapid heartbeat.

Switching From Smoking to Vaping Benefits

The FDA and CDC have identified nicotine as an addictive substance. However, cigarettes contain much more than just nicotine. In addition to the chemicals that naturally occur in tobacco, cigarettes contain a long list of questionable ingredients added to make cigarettes more appealing. For example, ingredients such as menthol mask the taste and make the smoke easier to inhale. Other ingredients such as ammonia actually make cigarettes more addictive by increasing how much nicotine your body absorbs. In fact, research suggests nicotine alone cannot explain the intensity of cigarette addictions. Instead, additives such as pyrazines may be the primary culprits behind failed attempts to quit smoking.

The fact that e-cigarettes do not contain all of the ingredients found in cigarettes may partially explain the results of the recent Wave 1 Population Assessment of Tobacco and Health (PATH) Study published in Preventive Medicine. This study compared rates of dependency among adults who use e-cigarettes or cigarettes exclusively on a daily basis and found that, in general, e-cigarette users were less addicted to their devices than smokers.

E-cigarette smokers reported a longer delay between the time they woke up in the morning and their first use of the day. Cigarette smokers, in contrast, were more likely do the following:

More Control Over Your Nicotine Intake

Not only does research suggest that vaping is less addictive than smoking, vaping also gives you more control over your nicotine intake. While smokers have the ability to decide which brand of cigarettes to use, how quickly to smoke, and how often to smoke, it is difficult to identify the nicotine strength of cigarettes; you have to account for the tobacco in the cigarette as well as any extra nicotine added by the manufacturer.

Although the FDA has the power to regulate cigarettes and has announced plans to limit their nicotine content, no such limitations currently exist. A cigarette can contain anywhere from 8 to 20 mg of nicotine or even more, and manufacturers are not required to disclose the amount on the label.

Vape juice puts more power in consumers’ hands by clearly disclosing its nicotine content in one of two ways: as a percentage (the nicotine by volume, or NBV) or in milligrams per milliliter (the nicotine strength). As a result, users can easily compare products and exert more control over their nicotine intake. Users can even find 0 mg/ml vape juice, which contains no nicotine at all.

Many of the health risks associated with cigarettes come from the delivery method, not from the nicotine itself. Cigarettes rely on combustion to produce the smoke that delivers nicotine to your body. As the tobacco burns, it produces several carcinogens and chemicals that are not found in e-cigarette vapor. According to David Levy, a professor of oncology at Georgetown’s Lombardi Comprehensive Cancer Center, most smoking-related deaths are caused not by nicotine but by “all the other stuff in cigarettes that people inhale.”

Lung cancer, for example, is caused by the tar produced when tobacco is burned. This tar builds up in the lungs and contains hundreds of chemicals that are harmful to smokers and anyone exposed to secondhand smoke. The toxins in cigarette tar can cause heart disease, diabetes, and fertility issues, as well as cancer and various lung diseases.

In fact, Levy and other cancer researchers at Georgetown have predicted that encouraging smokers to switch to vaping could result in 1.6 to 6.6 million former smokers living a combined 20.8 to 86.7 million years longer than they otherwise would. Even if you continue consuming the same amount of nicotine, switching to vaping is worthwhile because vaping is a safer delivery method than smoking.

Of course, “safer than smoking cigarettes” isn’t quite the same thing as “safe.” After noting that e-cigarettes are less harmful than their traditional counterparts, the CDC goes on to note the potential dangers of e-cigarettes:

It’s worth noting that equivalent, similar, or greater risks accompany regular cigarettes. As with many activities, the safety of vaping is relative. If you are choosing between vaping or not vaping, then it is obviously safer not to vape — in the same way that the risk of drowning or being attacked by a shark makes swimming in the ocean a more dangerous choice than staying on the shore.

If you are already a smoker, however, vaping is a good alternative. Even the CDC agrees that “e-cigarettes may help non-pregnant adult smokers if used as a complete substitute for all cigarettes and other smoked tobacco products.”

Vaping can be a low-pressure, long-term, and enjoyable way to quit smoking. With vaping, you’ll have more control over your nicotine intake, and you’ll avoid many of the health risks associated with smoking. Plus, unlike many other ways to quit smoking, vaping allows you to curb your nicotine addiction without making major changes to your daily routine.