What Liquids Can You Vape?

Whether you’re an experienced vaper or you’re brand new to the world of vaping, knowing what you can and cannot vape is essential not only for the safety of your vape pen, but for your health. Most vape juice uses vegetable glycerin and propylene glycol as suspension liquid. This liquid is what holds everything together and gives the vape juice its flavor. There’s been a lot of debate centered around vaping alternative liquids and we’re here to discuss what’s safe and what isn’t. Here’s a guide to what you can and cannot vape and why.

Can You Vape Water?

The idea of vaping water has taken off lately and to be honest, we’re not sure why. Some people have cited being concerned about the chemical properties in vape juice and wanting to avoid any and all chemicals. Technically, you can vape water. It is entirely possible. Many vape juices contain water to help dilute viscous compounds and make them easier to wick up. Some people even add extra water to make the juice less strong if they don’t like intense hits.

However, if you want to vape straight water, you won’t end up getting much out of it. All you’re doing is turning the water into steam, and you won’t get much more than a lungful of vapor. Water is a poor conductor of flavor so if you’re planning on adding a bunch of flavoring into the water just to enjoy the taste, you’ll probably end up disappointed. Because water doesn’t keep flavor well, some people will try to put a bunch of extra flavoring it, which can cause a range of issues all on its own.

Another reason why people want to vape water is to produce impressive smoke clouds. Unfortunately, that’s a no-go with water-filled tanks. You actually won’t end up getting any clouds. The chemical properties of vape juice that allow for thick clouds are missing in water. By the time you exhale, the water will be cool enough that you’re just breathing out damp air.

The Dangers of Vaping Water 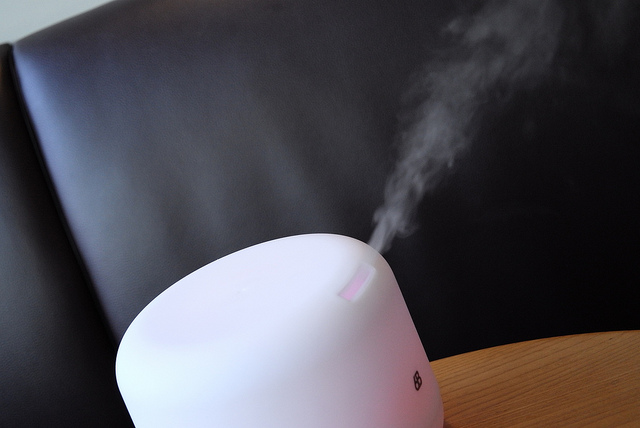 Vaping water can have some side effects that aren’t great. Vape batteries send enough power to the coil to instantly superheat the liquid, turning the liquid in the tank into vapor that you then inhale. When you’re vaping water, it’ll heat up more than the thicker vape juice which can lead to burns in and around your mouth. If you breathe in too hard, you may even end up with burns in your throat which can pose some real concerns.

Vapes can heat up to well over 400 degrees Fahrenheit, which obviously isn’t the temperature you want the vapor to be when it enters your mouth. Most e-juice takes longer to heat up than water because of its thickness and viscosity, which is why the vapor isn’t as hot when it gets to your mouth. Vegetable glycerin and propylene glycol typically don’t rise above a comfortable level. On the other hand, vaping straight water can lead to serious, unpleasant burns. While we understand why some people feel iffy about chemicals, the ones contained in vape juice are very low-risk and make your vaping experience way better, not to mention safer.

Because you’re also introducing basically straight moisture to your lungs, you also run the chance of infection. Too much moisture in your lungs isn’t good and vaping straight water is doing nothing but putting water in your lungs. If you’re a big fan of really moist air, just use a humidifier. It’s an easy and safer way to enjoy humid air than trying to vape it.

Why Is Vaping Water Not a Good Idea?

Ultimately, vaping straight water isn’t a good idea. It isn’t necessarily the worst thing for you and the chance of having a serious health complication like an infection because of vaping water is very rare. However, burns are a real issue with this style of vaping and tend to be the most major problem. The risk of burning yourself isn’t worth it, especially when there are so many better options out there.

Plus, because it’s straight water, your vape pen is going to make a seriously terrible noise. When moisture is introduced to high levels of heat, you’ll get some crackling and popping noises. Since vaping water is introducing nothing but moisture to the mechanisms, it can be extremely loud and may even damage the interior components of the device.

Can You Vape Alcohol?

Another trend that we’re similarly confused by is vaping alcohol. Clearly the best way to consume alcohol is to drink it, but there are some people who have figured out how to vape it. The process for effectively ‘vaping’ alcohol — consuming it as a gas instead of a liquid — requires glass beakers and straws, plus candles for heat source, so that it seems much more like a scene from Breaking Bad than vaping.

At the end of the day, vaping definitions aside, you can vape alcohol. It’s exhausting and time consuming and honestly, if you’re trying to get drunk, its better to just drink the alcohol. According to ecigarettereviewed.com, it takes about 60 ml of liquor to get drunk through vaping. That’s over a shot and that’s if it only takes a bit to get you drunk. In the time it would take you to vape the liquor, you can take several shots and enjoy yourself instead of fiddling with heat and glass.

So yes, you can vape alcohol. People are doing it. It’s a niche market and we’re still unsure why you would want to do it but hey, to each their own.

Can Vaping Alcohol Hurt You?

Vaping alcohol is not without its dangers. You cannot vape alcohol through a traditional vape pen. However, alcohol is highly combustible, especially if you’re going for high proof, straight liquor. Vape pens get so hot, you’ll put yourself in serious danger if you try that. Even if it doesn’t bust up your vape, you can end up with serious burns similar to vaping water.

Vaping alcohol is also bypassing your liver, introducing alcohol straight into your system. You may end up getting really groggy and have a different sensation than you would get from drinking normally. It’s very important to be responsible while drinking so aside from the complicated process, we’re hesitant to recommend this.

The Dangers of Vaping Alcohol 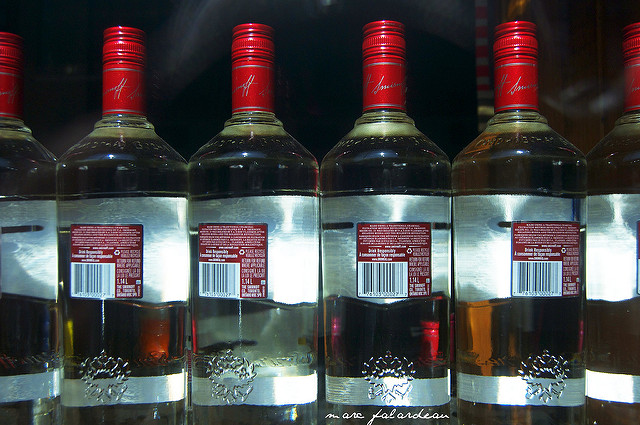 There are a lot of reasons why vaping alcohol isn’t a good idea. It’s dangerous to just put liquor in a vape tank and can lead to serious health consequences. When you vape alcohol, provided you’re doing it right, you’re completely bypassing your liver. The alcohol is instead passing through your alveoli, the small sacs in your lungs that inflate when you’re breathing, and going directly to your bloodstream. This means you’re getting buzz way faster but it also adds a level of unpredictability.

Companies like Vaportini make vaping alcohol a little more approachable and this is the method that includes all the fancy equipment. If you’re dead set on trying to vape alcohol, these systems can help you do it safely..

What Oils Can You Vape?

When looking at oils you can vape, we strongly recommend sticking with the vegetable glycerin and propylene glycol blend. This will give you the smoothest hit and the strongest flavor, with few negative side effects. Chances are, your vape was made specifically for a vegetable glycerin and propylene glycol blend, and will work best with these oils. Nothing’s worse than messing up your favorite rig because it can’t handle an alternative vape.

Vegetable oils are technically vapable but are less pure than vegetable glycol. The minimal differences between the two make it a poor substitute and also carry some health risks. Vegetable oils may also have a distinctive taste so while it’s an okay substitute, it’s probably better to stick with vegetable glycerine.

Coconut oil is another oil substitute that works in vapes. It’s gaining popularity as a more ‘natural’ alternative. There is some chance that coconut oil can clog up your vape since it’s thicker and it can have more impurities. That being said, many people are having success with it. If you’re trying to avoid as many chemicals as possible, it may be a good choice for you to try.

What Oils Can You Not Vape?

Unfortunately, there are far more oils you can vape than ones you can’t. Before you try out a new product, be sure to do some research online so that you can avoid any potential disasters.

Essential oils are starting to take off, with more and more people using them as a holistic treatment. However, that doesn’t translate well to vaping. Most essential oils aren’t safe to inhale directly. They contain a lot of lipids and that can lead to a nasty illness called lipid pneumonia. There are also concentrates that aren’t safe to inhale because of the nature of the plant they come from. Essential oils are hyper-concentrated. Even if the source plant is okay to eat, that doesn’t mean a distilled version of the plant is okay to inhale.

Corn syrup is another additive that isn’t safe to vape. Some places use it to sweeten their vegetable glycerine and propylene glycol mixes. A little bit may not cause issues but too much can be dangerous. Corn syrup is pretty combustible so don’t try to add extra to your vape juice for some extra sweetness. If you DIY your e-juice, be extra careful with your flavorings, especially if they’re corn syrup based.

Can You Vape Tinctures?

Finally, tinctures are another liquid that a lot of people think will work great for vaping but don’t. Tinctures are a substance dissolved in alcohol and are used orally, typically beneath the tongue. They’re pretty fast acting and can help you get benefits quickly. Tinctures work great for many people and they certainly have their benefits, but they aren’t good for vapes. It may seem like vaping could help speed up and compound the effects that tinctures have when you take them orally, but that’s just not true.

For example, the main components of CBD tinctures would be CBD and alcohol, but it also has flavorings, sugars, and oils that can be highly combustible. Tinctures aren’t developed to be heated and smoked so the creators don’t take associated factors into consideration. One of the last things you want to deal with is an exploding vape or a vape on fire.

Overall, we recommend just sticking with the tried and true vegetable glycerin and propylene glycol. It’s a great balance between being comfortable to smoke and well-flavored. If you’re looking to get a little adventurous with alternative liquids, there are safe methods you can try out. Above all, we stress safety if you decide to try vaping alternative liquids. Your lungs are important!

Everything You Need To Know About Buying And Replacing Your Vape...