A Beginner’s Guide to Vape Etiquette

The number of vapers has exploded in recent years. It’s not uncommon to see people vaping as they walk down the street, drive to work, or sit outside at a bar. This rising pastime has also given way to primarily unwritten rules as to where and how vaping is socially acceptable. To make sure you’re not committing a vaping faux pas as you enjoy your e-cig, become familiar with the emerging vape etiquette. Here’s the skinny.

What Is Vape Etiquette? 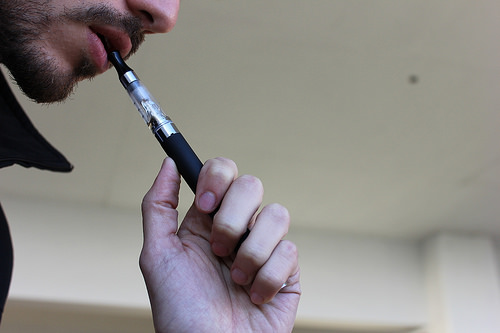 When we talk about etiquette, we’re referring to a code of proper behavior within society. For vapers, that means puffing only in the appropriate places and respecting others when vaping.

An official guide to vape etiquette doesn’t currently exist, and many of the do’s and don’ts surrounding vaping are vague or open to interpretation. But as vaping increases in popularity, more establishments are setting vaping rules and people are revealing what they consider inconsiderate versus harmless behavior. And that’s helping good vaping etiquette evolve, too.

Why Is Vape Etiquette Important?

Most people take up vaping because it’s a healthier alternative to smoking. But just because you’re not pumping out foul-smelling smoke doesn’t mean you can vape anywhere you like. Many people find vape clouds annoying or offensive, so it’s important to respect their position. Good vape etiquette will help vapers be considerate of others while encouraging non-vapers to accept this pastime.

It’s up to you to make the right decisions in social settings. Others will expect you to do so, as well. Practicing good etiquette will make any experience, vaping included, more enjoyable for both you and those around you.

Let’s start by reviewing ways you can be a courteous vaper, like:

Follow these rules of vaping etiquette to avoid giving vapers, and vaping, a bad name. And if someone seems misinformed or curious about what you’re doing, educate them politely about it. Some people still have a hard time separating vaping from smoking and the stigmas associated with both. Politely informing non-vapers about this pastime can help differentiate the two more clearly.

Where Can You Vape?

While smoking laws are well-established, there are fewer hard-and-fast rules and regulations for vaping. Some locales have instituted statewide or citywide vaping bans in all indoor spaces where smoking is prohibited. But generally, each business or establishment sets its own vaping policies. This can make it challenging and confusing to know when and where it’s acceptable to use your vaporizer. You can typically vape freely at the following venues:

In Your Own Home

Vaping from the comfort of your own home can be the most relaxing and less obtrusive way to go. At home,  you can vape to your heart’s content. That is, unless you rent a room from someone or have a landlord that strictly prohibits vaping. Another benefit: Vape clouds don’t leave permanent odors and stains like smoking does. If you’re expecting company, however, you might want to air the place out first to be polite.

Outdoor spaces are generally fair game for vaping, unless signage indicates otherwise. Of course, the most acceptable place to vape is on your own patio or in your outdoor area, but many public spaces also allow it. Some parks, however, are starting to ban vaping, so look for notices before using your e-cigarette. When you do vape, stand downwind or far enough away from others so as not to bother them with your cloud. Avoid vaping on busy streets or in crowds where your vape cloud could be offensive to some people.

If you enjoy vaping on the road and you’re in your own vehicle, go for it. Never vape with children in the car, however. When you do vape in your car, roll the windows down to let the vapor escape and not cloud your vision. In some places, police can ticket you for careless driving if vapor obstructs your vision while you’re driving.  It’s also smart to pull over if you need to change batteries, refill a tank, or otherwise tend to your vaporizer. And as you would your home, air out your car post-vape before transporting other people.

To vape freely, seek out a vape shop or lounge, which are popping up all over to help smokers kick their habits and to provide a comfortable environment for vapers. Similar to hookah lounges, these establishments have a social element to them — kind of like your friendly neighborhood bar. They might have televisions, live music or a DJ, and food and drinks. Vape cafes typically sell also vape supplies and have knowledgeable staff.

One place where vaping rules are less defined is in the workplace. Some companies are getting on board with vaping because they realize it’s more productive to let you use your e-cig in your office than to ask you to stop work and go outside. If your office doesn’t have a vaping policy, it’s still good etiquette to ask your boss first. Then talk with your colleagues to determine whether they mind if you vape and where. If you have an office with a door you can close, your hobby is less likely to be an issue.

As a general rule, avoid vaping in confined or common areas, such as conference rooms or office kitchens. Leave vapor flavors that have strong scents at home, and opt for subtler ones in the workplace.

Where Shouldn’t You Vape?

More businesses and organizations are banning vaping, but these regulations can be confusing and can vary by state. To be on the safe side, adopt a general policy of not vaping where you wouldn’t smoke, unless told otherwise. You probably shouldn’t vape in these places, either because it’s either prohibited or simply frowned upon:

On Airplanes or in the Airport

You aren’t allowed to vape on major airlines. Similarly, many airports, such as Los Angeles International Airport, have banned vaping altogether. Others allow it only in designated areas or in certain terminals. You can usually find this information on any airport’s website. You can take e-cigarettes through security in your carry-on, but not in your checked luggage.

Most restaurants set their own policies as to whether to allow vaping and where. If they prohibit vaping (and most now do because of the proximity to food), management typically posts a notice in plain sight. Many bars do still allow vaping, particularly in outdoor spaces. If you’re unsure about the policies in any of these settings, however, ask. There’s no harm in asking, and it’s far more considerate than just whipping out your vaporizer.

Most bus lines, subways, and train networks have banned vaping. Some have even banned it on platforms and in waiting areas. Even if vaping is still allowed in those public spaces, however, it’s considered poor vaping etiquette to use your e-cigarette. The vapor cloud and aroma can be irritating to some people in crowded areas. Some cab companies prohibit vaping in their cars, while vaping is allowed at the driver’s discretion in others.

Universities are starting to add e-cigarettes to their smoke-free policies. This means they’ve banned vaping in all campus buildings as well as in outdoor areas, including parking lots, green spaces, and sidewalks. Check with the school’s policy (you can usually find this online) before using your e-cig on campus, or look for designated smoking and vaping areas, if they exist. Many middle and high schools have also banned vaping on school property, due in large part to the rise in teen vaping.

This tip is more common sense than etiquette, especially if you share your bed with a non-vaper. Just like you wouldn’t smoke in bed, don’t vape under the sheets, either. While your e-cigarette probably won’t cause a fire, it could result in a leaky mess.

In 2015, the U.S. National Park Service banned vaping in all federal parks, citing purported fire, air quality, and health risks. Vaping now falls under the same restrictions as smoking on park grounds and during group activities.

Many hospitals have long had smoke-free policies to reduce the amount of smoking and secondhand smoke on their campuses. Some have now implemented e-cigarette policies as well. Vaping proponents, however, argue that e-cigarettes should be allowed as an alternative for patients and staff trying to quit smoking.

Other places that have enacted vaping bans include some sporting venues, shops, government properties, and theaters. Most of these bans stem from a lack of or misinformation about e-cigarettes, causing some organizations and establishments to take a “better safe than sorry” approach by lumping vaping in the same category as smoking.

When it comes to vaping, particularly in public areas, following smart vaping etiquette can help the non-vaping community embrace your hobby and avoid the negative connotations that might be associated with vaping. Being a considerate vaper revolves around using common sense. If you’re in a situation where smoking would be banned or frowned upon, you probably shouldn’t vape. But when in doubt, ask for permission. You might just be surprised how many people or establishments will invite you to vape politely in the appropriate area.

Gut Check: Is Vaping Good for Your Stomach? A New Study...